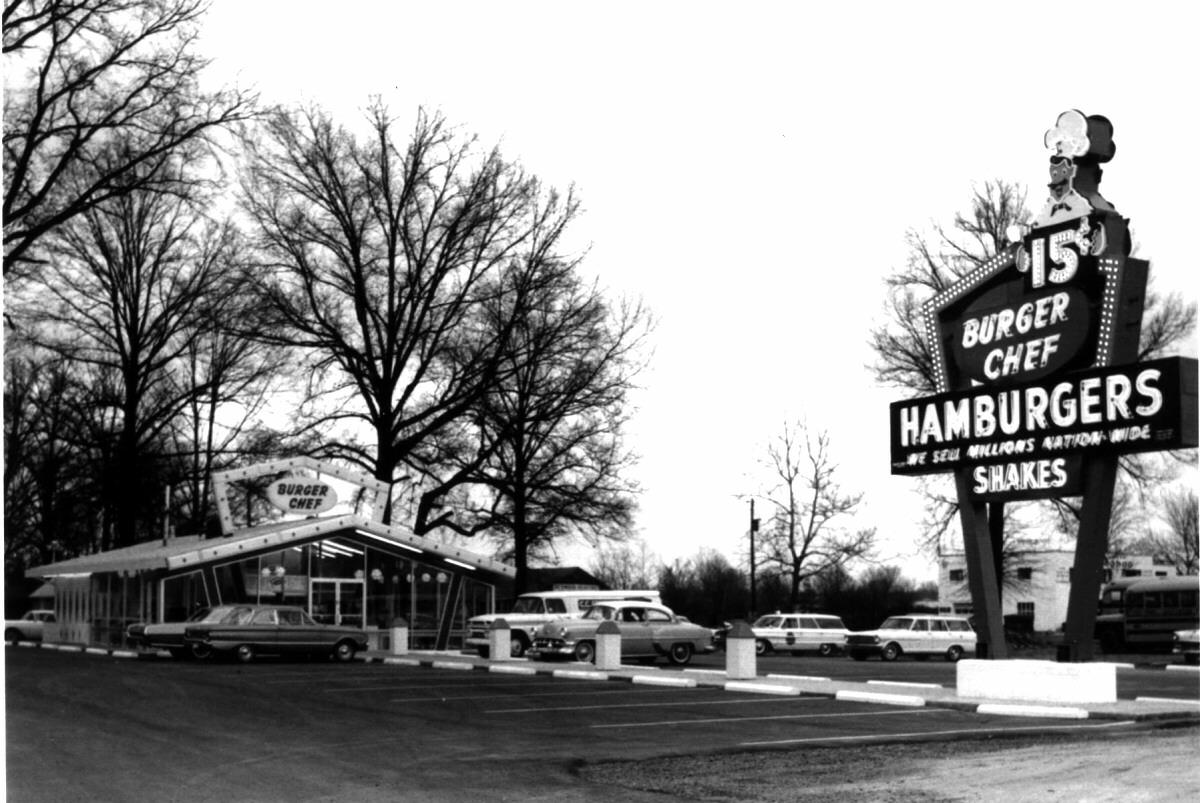 Below are my Dad and Mr. Schneider, from a 1969 newsletter describing a local offer in Louisville.

Ky. Colonels was an ABA Pro Basketball team.  Same bc location as above. 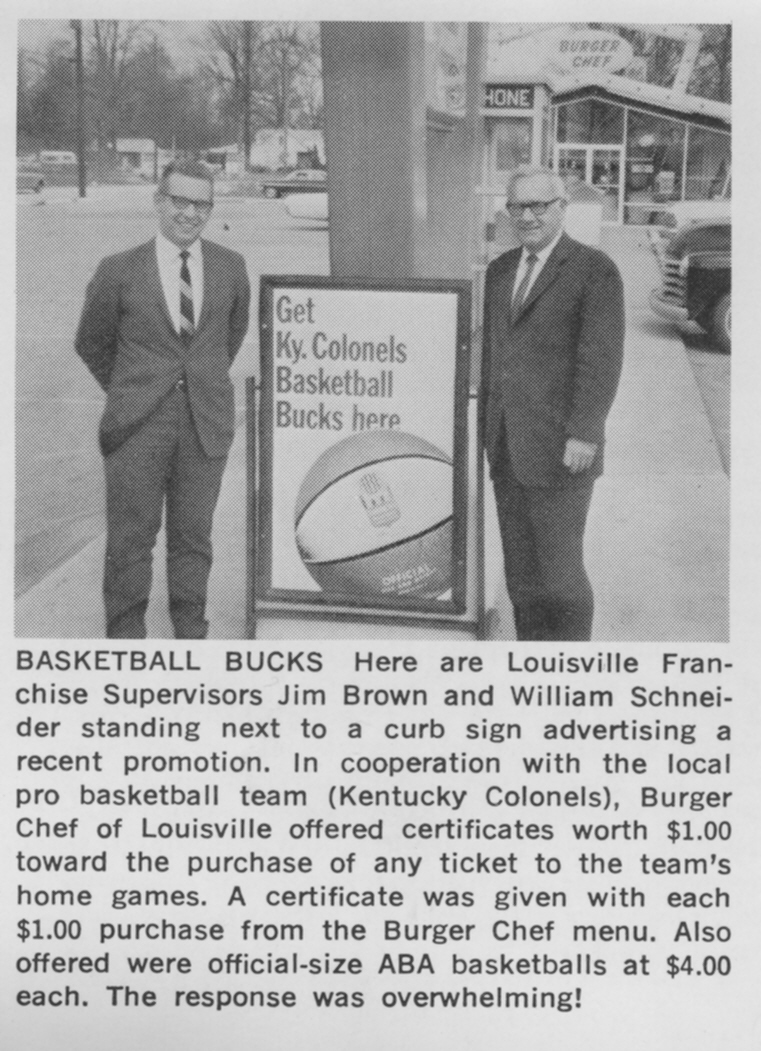 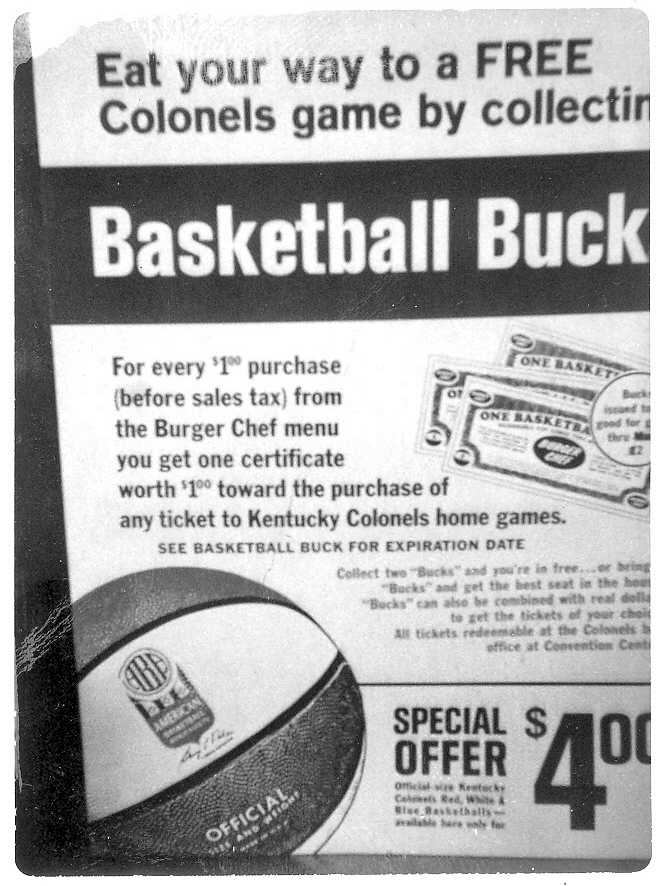 Below - Okolona Burger Chef - Pictured from the air, Jan 1972, after the first re-model. 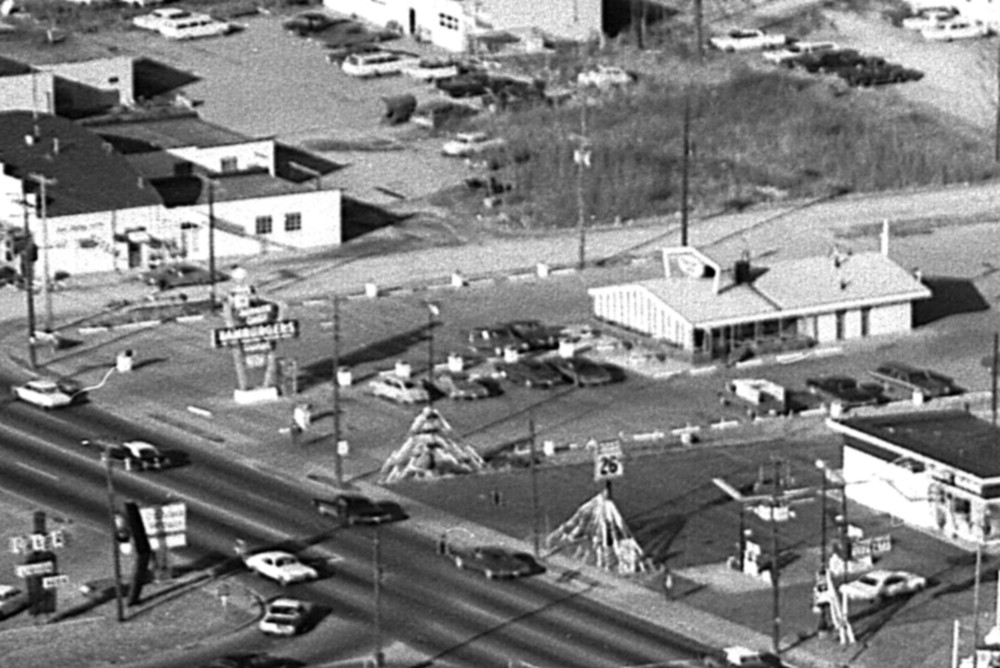 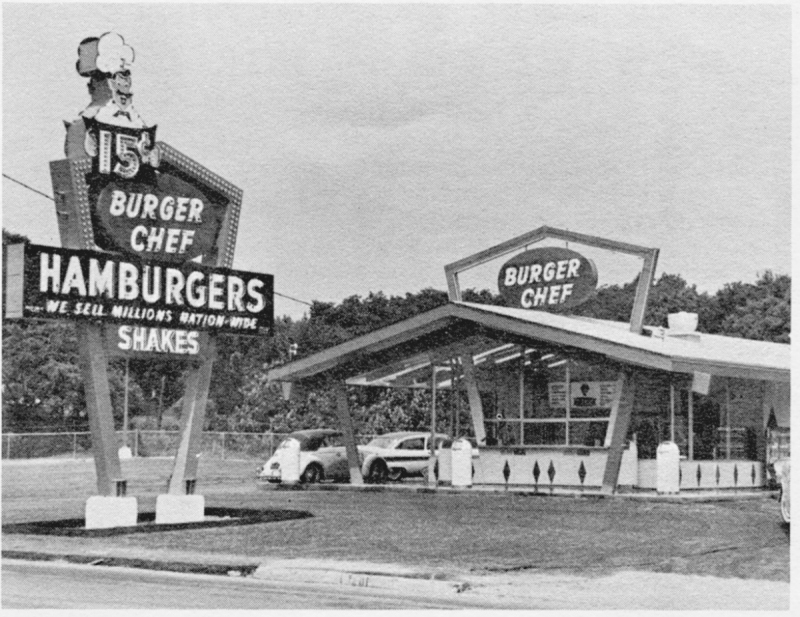 above, Opened by Fendrick Restaurants of Indianapolis, was bought by the Louisville Franchise 1963.

like the New Albany store pictured above.  Burger Chef had a pretty consistant look by 1960.  These were the original

bc-08 buildings, in the winters a small glass enclosure was put up, but in 1964 new Burger Chef's added a permanent large

glass enclosure that stayed in place.  It started halfway back on each side and came up and accross the front.  This allowed

for permanent stools and chair seating down each side. It was a common modification to add seating to all original walk-up

Burger Chef's build before 1964.  In 1965 new constructed stores were built like the originals, but the front was extended out

to allow a row of booths accross the front of each store, these building plans were titled bc-08-16.  This style was built until

Burger Chef's more than half were built during this time, there are a few of these buildings still around doted throughout the countryside.

1966 - My Dad was a manager at 24 years old (picture below), three years later he was an area supervisor. 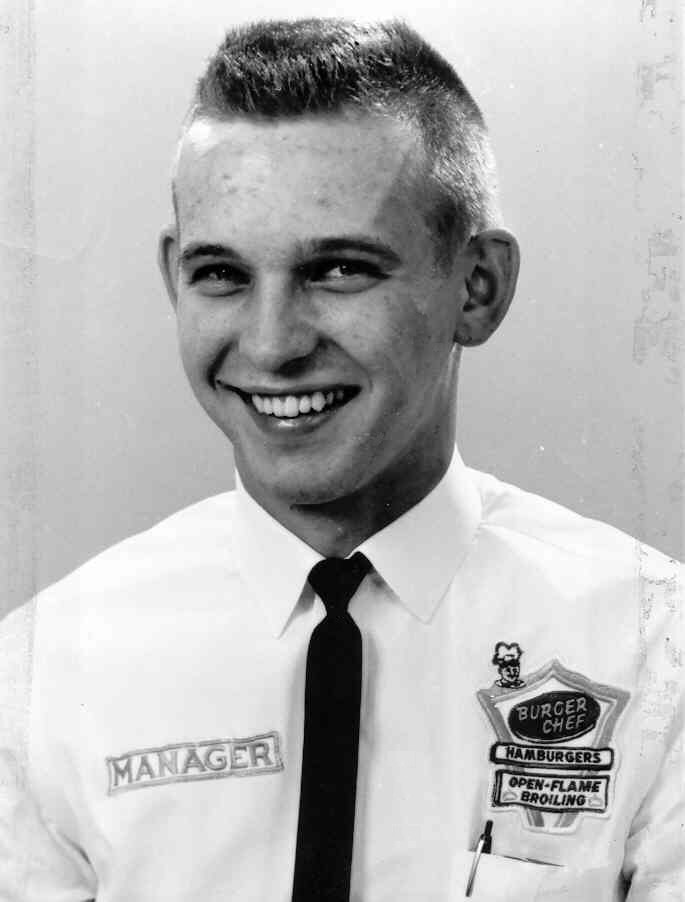 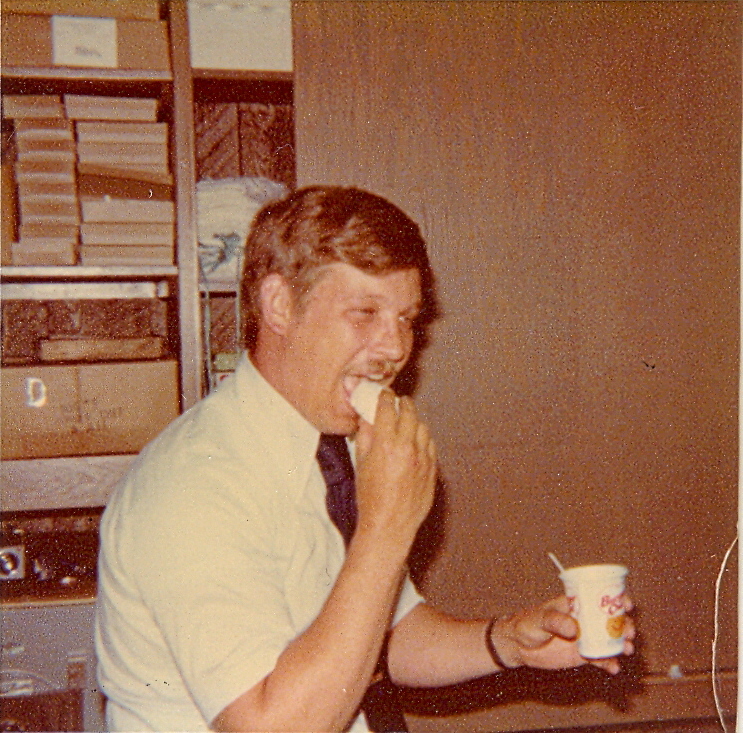 My Dad, Jim Brown eating cake in the office of a grand opening in Louisville about 1977.  I think it was the new store on Shepherdsville Road near GE. 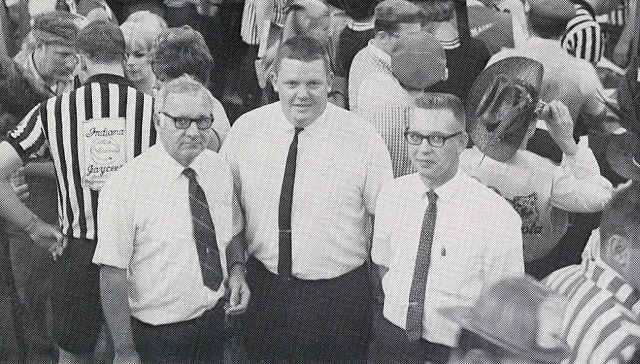 National convention of the Junior Chamber of Commerce.  Over 8,000 Hamburgers were made by a broiler inside the convention center and from the local Louisville KY Burger Chefs.

Mr. Schneider and his brother originally built the first Burger Chef (1963) in Louisville and were building their second (1964) when Mr. DeBeer and his partners bought the two and began the Louisville Franchise of Burger Chef's that lasted until 1978 when his partners voted to sell all the franchised stores to Norris Foods from West Virginia. This photo is from a newsletter.    COSMO II - design I added Burger Chef & Jeff to be interesting. All photos below are from my parents collections. 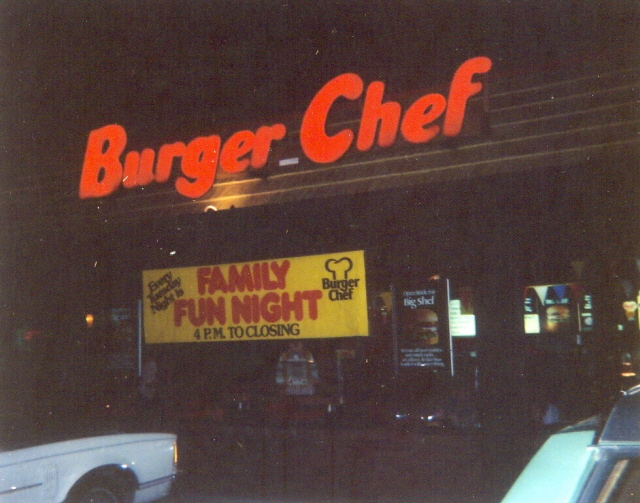 Debbie M in the clown outfit, she became store Manager. 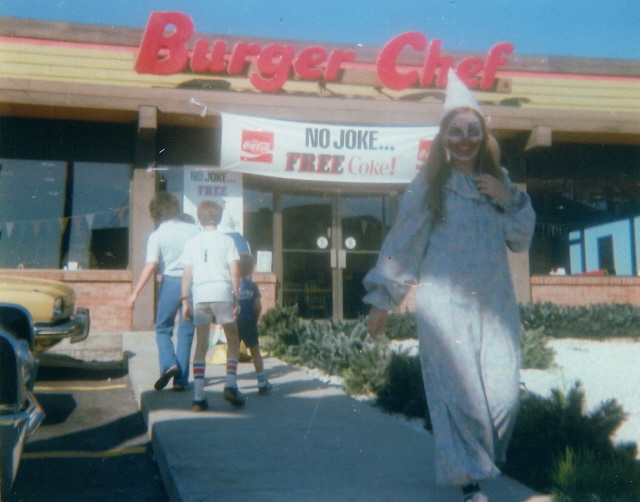 (Below) Inside counter in Louisville bc, not sure which one, on Family Fun Night ! 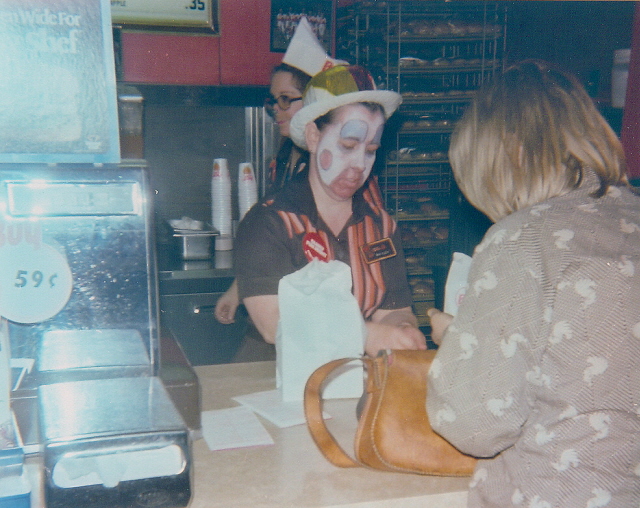 (Below) Employees used to dress up in costums or put clown make-up on. 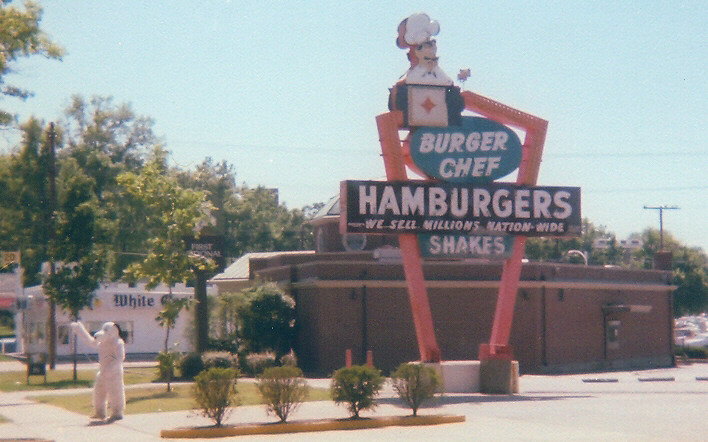 (Below) 3122 Dixie Hwy in City of Shively, (also considered Louisville).  Those signs were huge ! 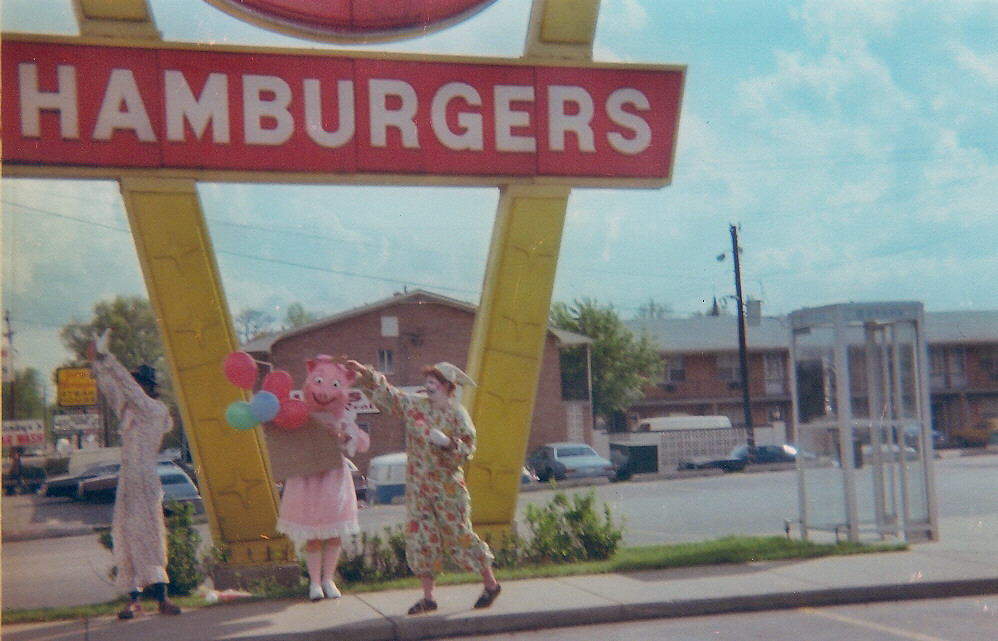 Below is an after-hours shot, probally from the Shively or Jeffersontown Burger Chef in Louisville, KY. 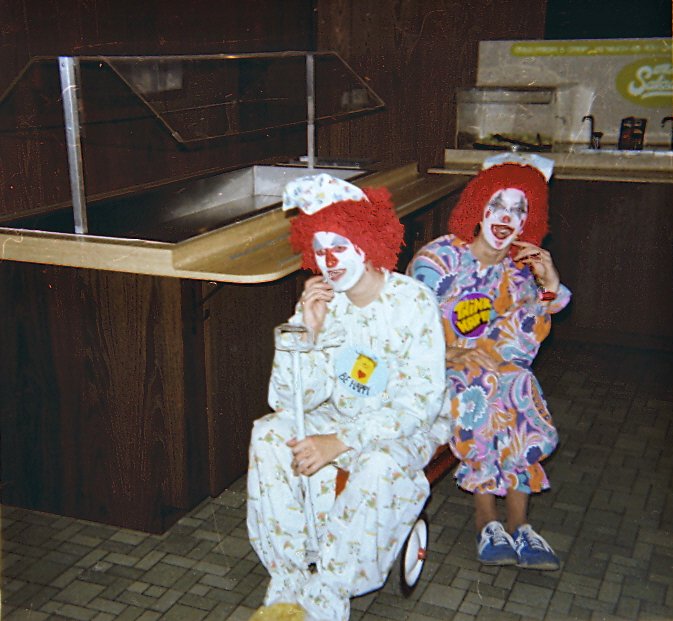 The old blue tile floor gives the location away, by the late 70's (when this photo was taken) all the Louisville

which both kept the cosmo II look until closing in late 1982.

Utilized as bar and torn down about 2002. Corner Bardstown and Waterson Trail, in community of Fern Creek, KY 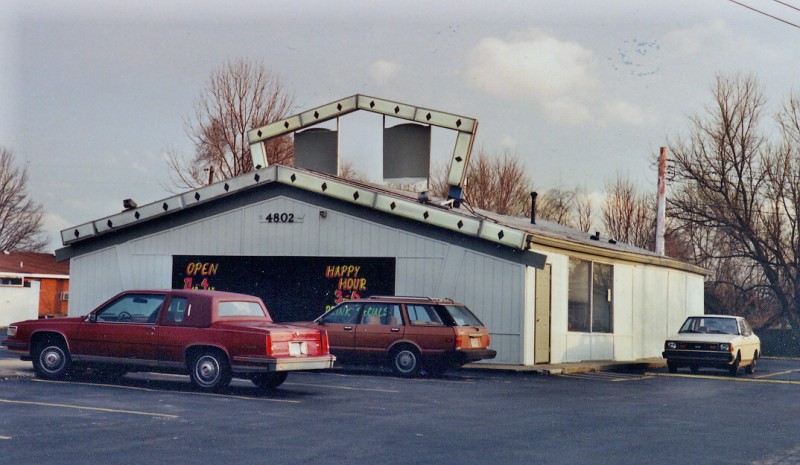