Burger Chef began an unusual task of trying to place restaurants in the downtown areas of large cities. 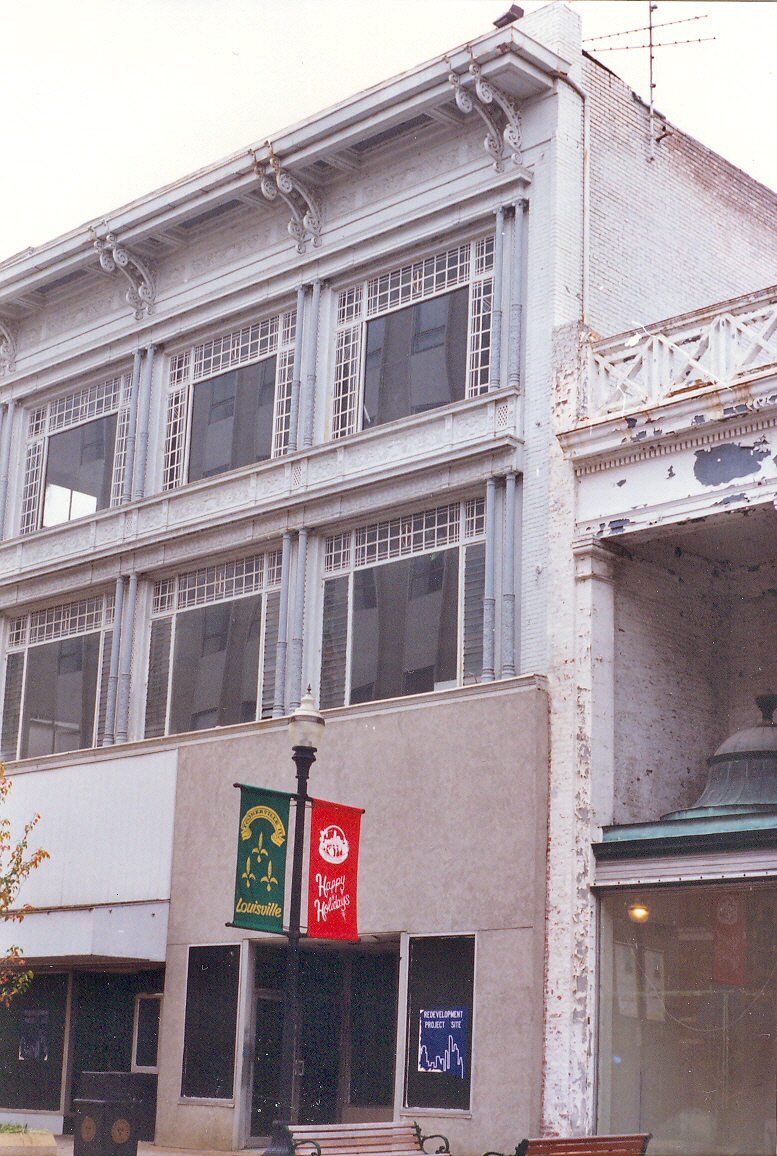 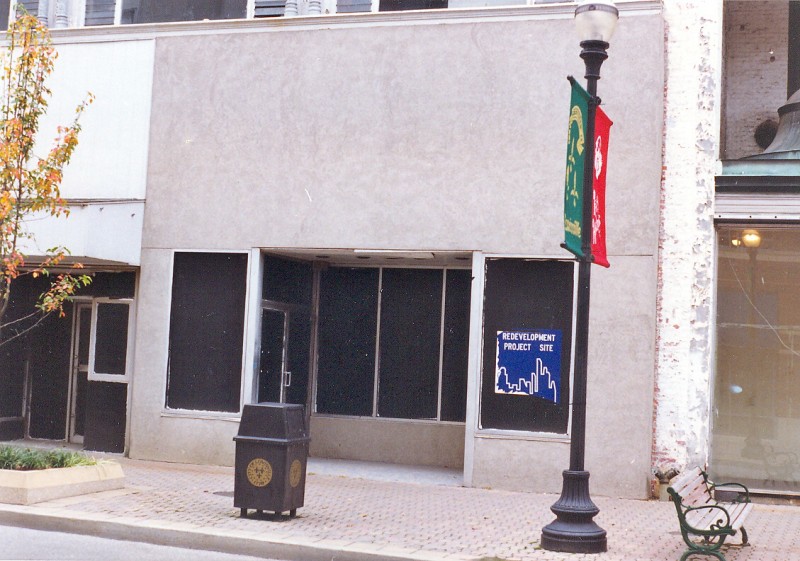 These photos are of the location about 1996, the old blue tile is still visible between the doors.  It was in a very historic building.

In about 1998 a fire destroyed the building, Louisville kept the front, the rest was rebuilt.    These are photos I took.

ABOVE and RIGHT is a photo that Gary recreated from hours of doctoring of the picture on the left,  to re-create 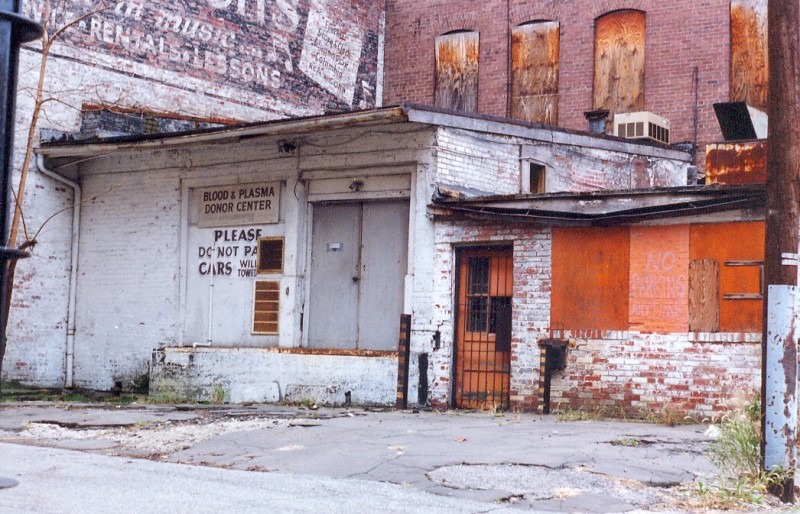 Above is the old loading dock that was in the rear.  BC was on the first floor and was a cafeteria style store with trays and self service. 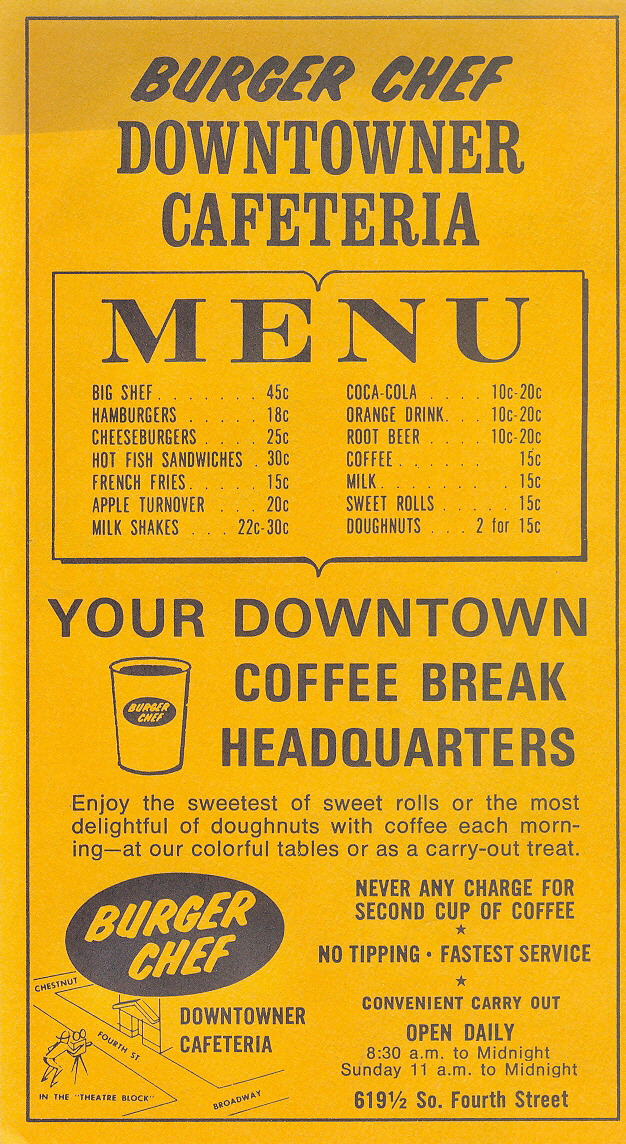 Opened August 1967 and closed in about 1971.  Typical move of business to suburban areas claimed this

location...  not enough business to keep open.    I wish I had Grand Opening photo's.... 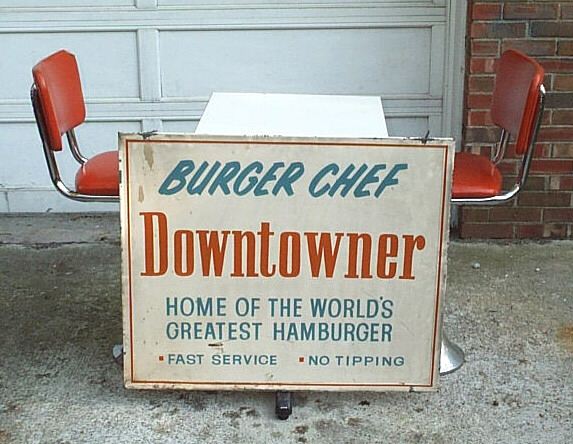 Above, the original sign that hung at the sidewalk, it is in my garage now!!

It is probally one of my most cherished possessions.

Poss others? Let me know if you know of other Downtowner Locations? 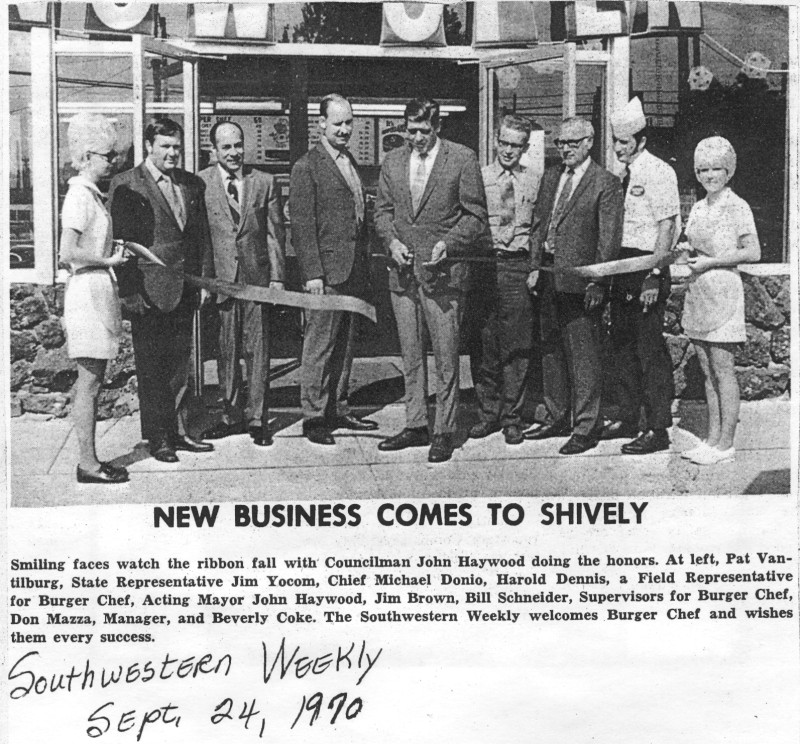 *Side note - one of the two lights over the head of the lady on the right is the one in my basement :)

I gave my Dad the other one.  I worked as a Police Officer in Shively for 14 years, and took them out about 1995.

Original Newspaper was given to me by Police Chief Michael J. Donio, Chief of Police 1964 to 1983.

Louisville,KY - area bc, about 1968/69 unkn Manager and Front line waitress. 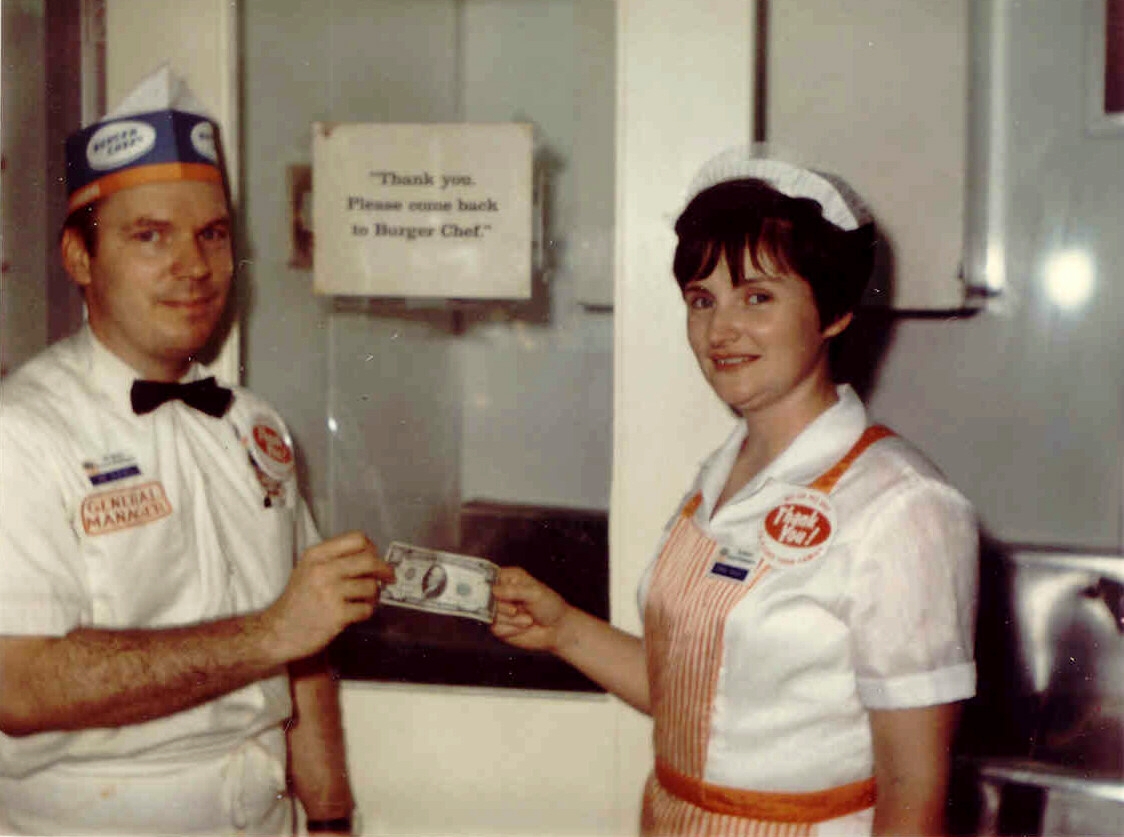 Diningroom lights are visible, about 1968. 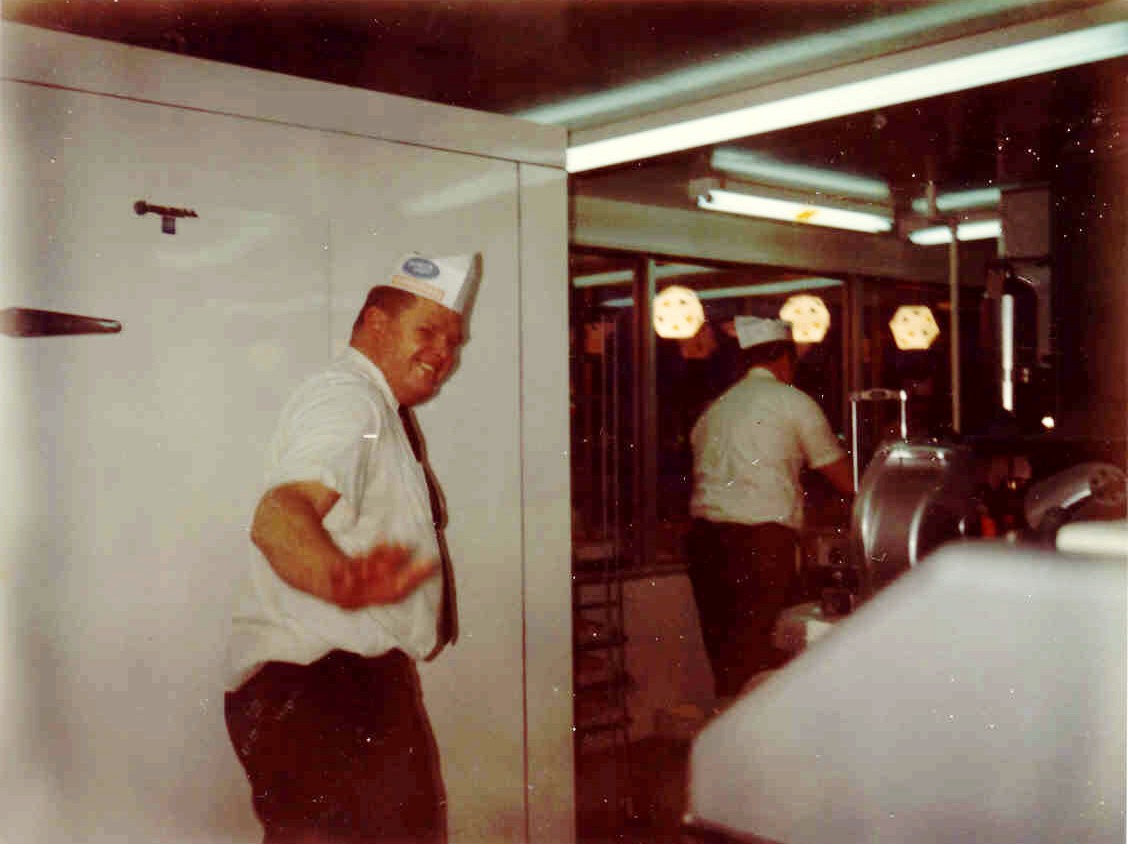 below, Possible Maysville, KY area Burger Chef about 1968 or 69. 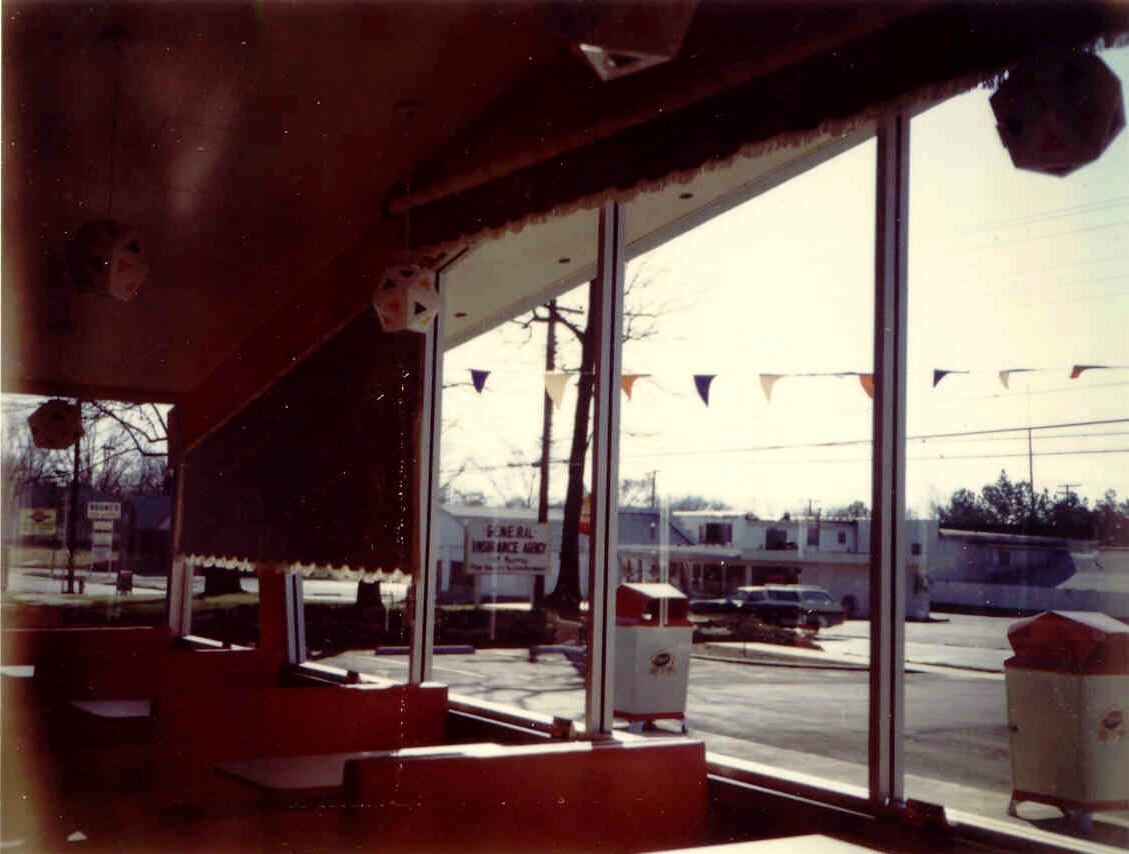 Christmas at Burger Chef, New Cut Road, Louisville KY, across from Iroquois Park, 1978 or so. 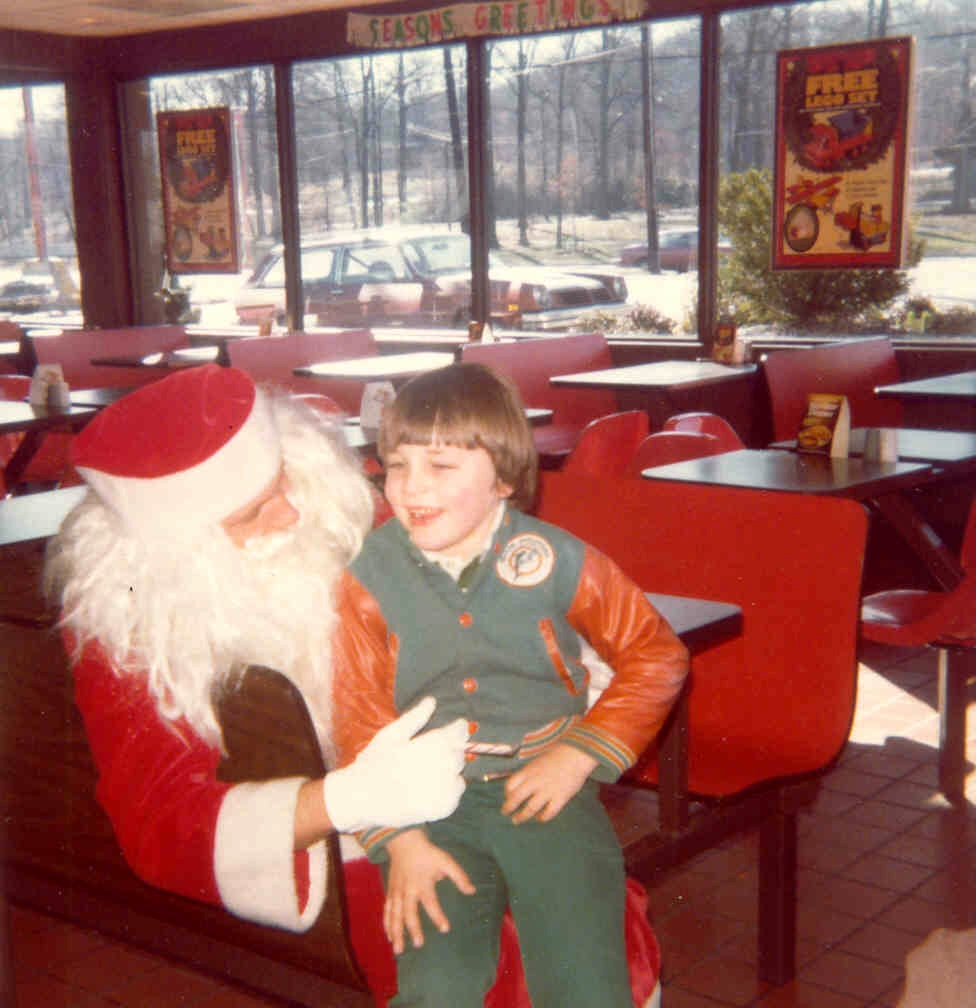 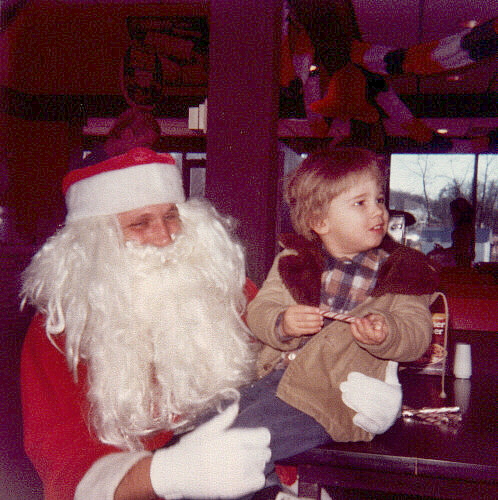 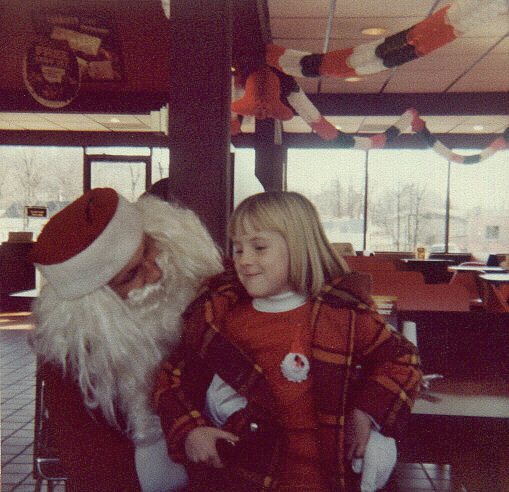 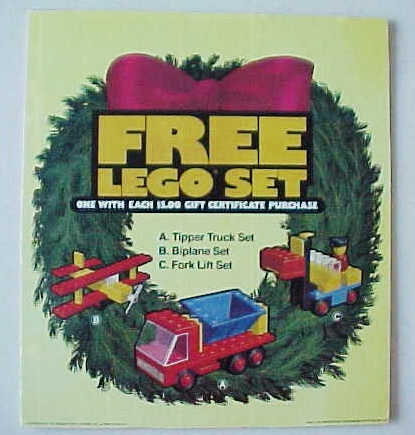 Okolona bc, spring 1978 little league baseball parade, notice the uniform, it was the last to be worn in this area. 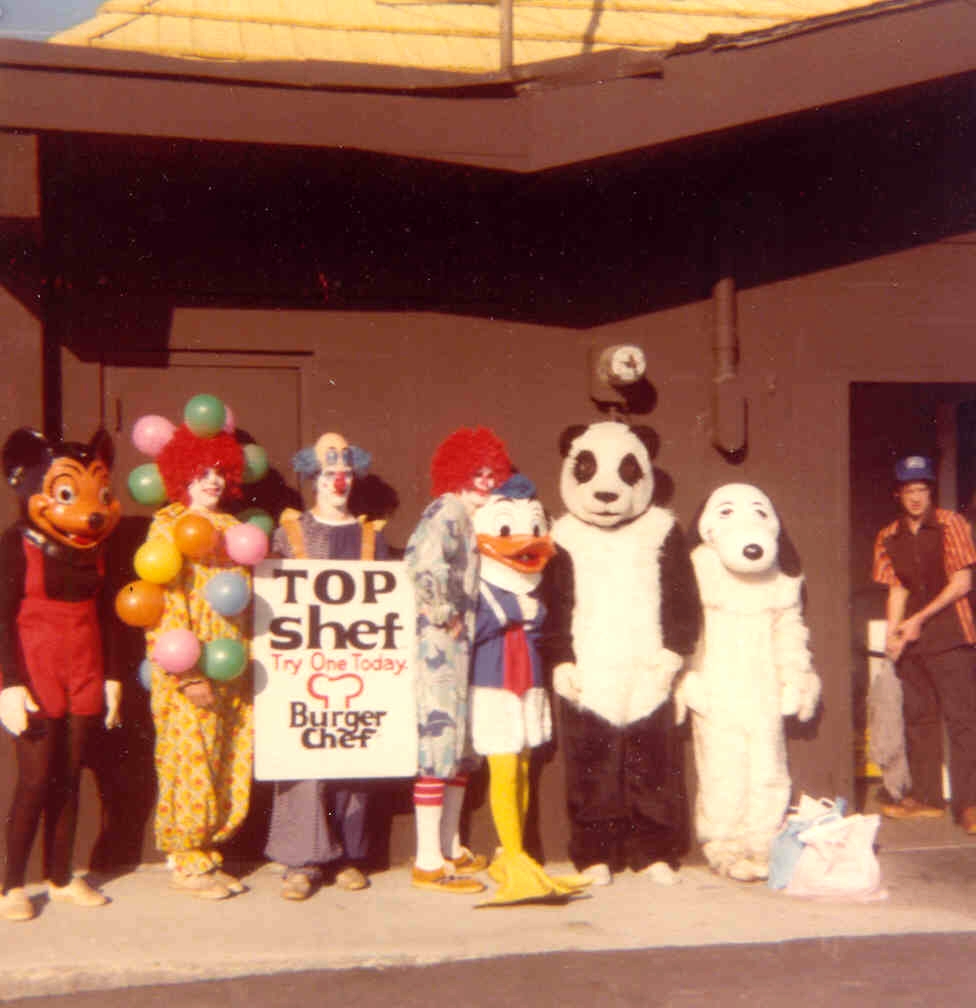 This was my Dad's 1960 Ford F100 pickup, at the rear of the truck is the Okolona bc manager Henry Rutherford. He was manager untill they closed about spr 1983. 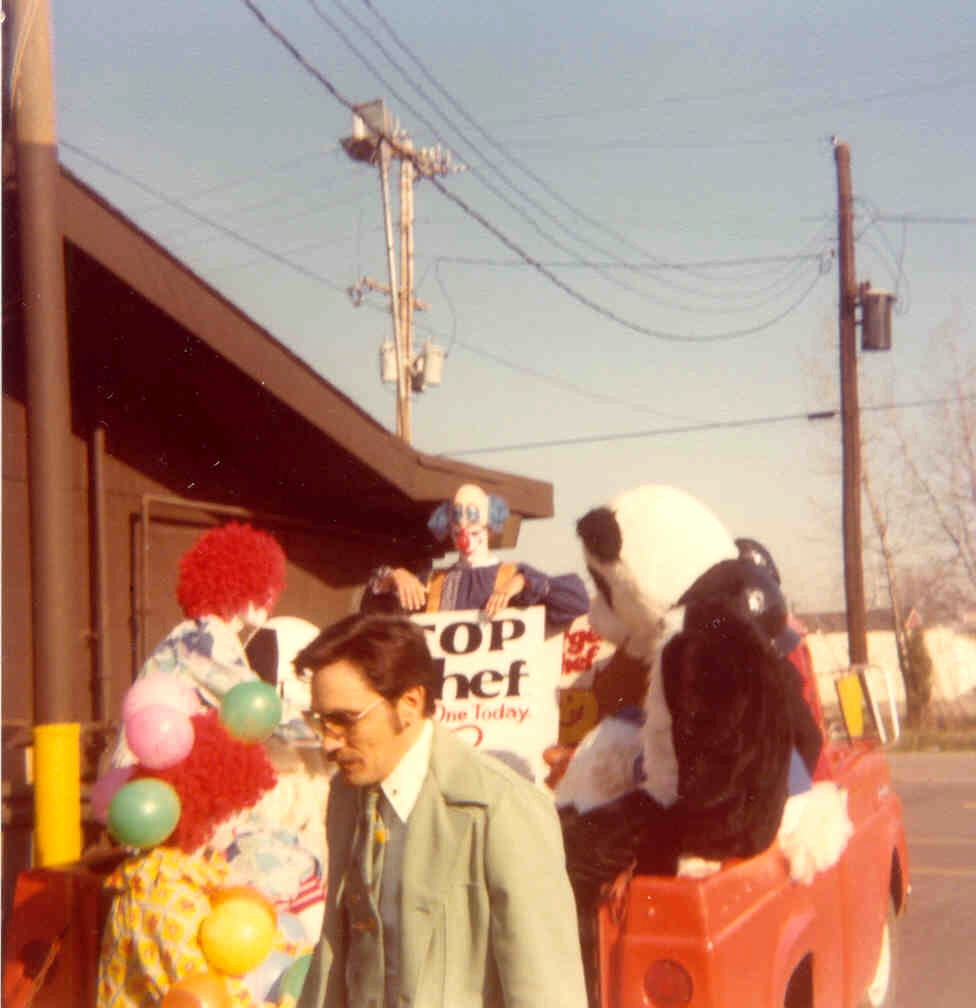 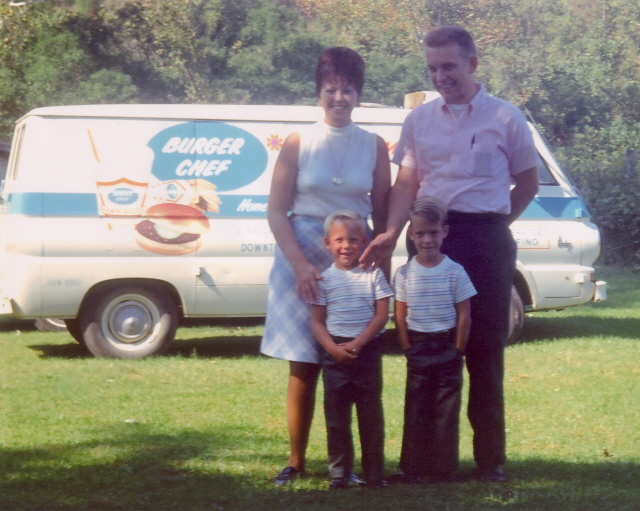 above,that's my Mom, Dad and Brother.  I am standing in front of my dad. 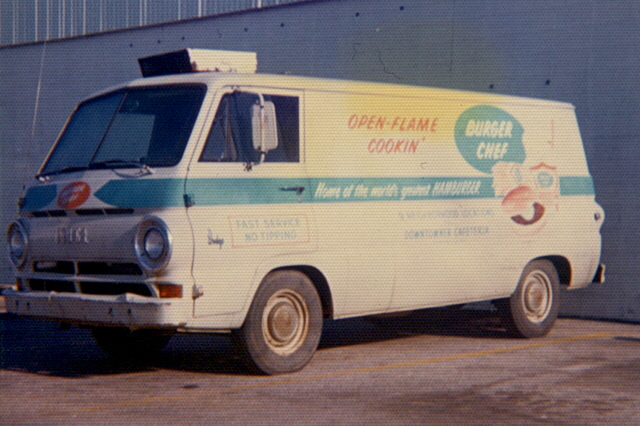 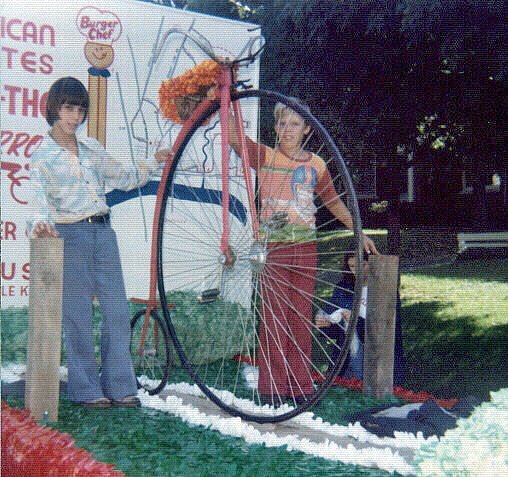 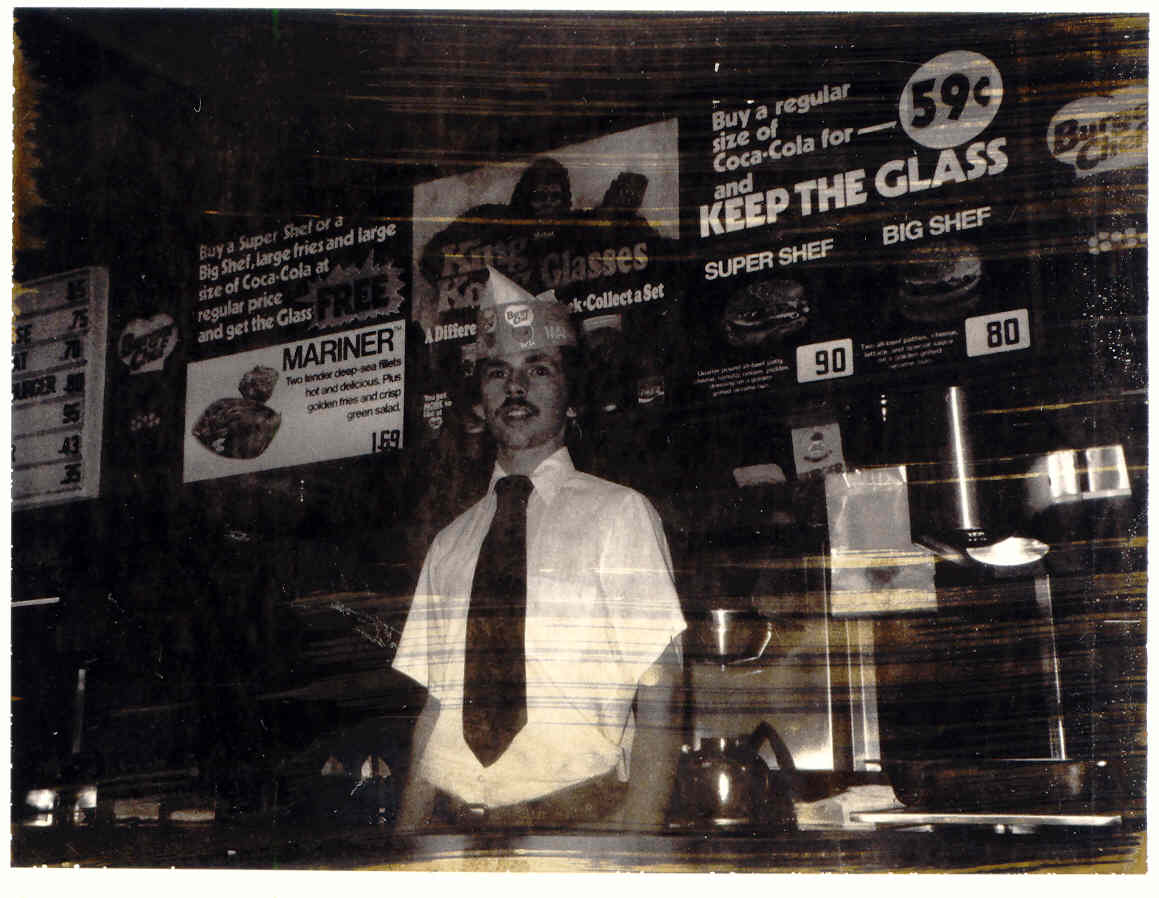 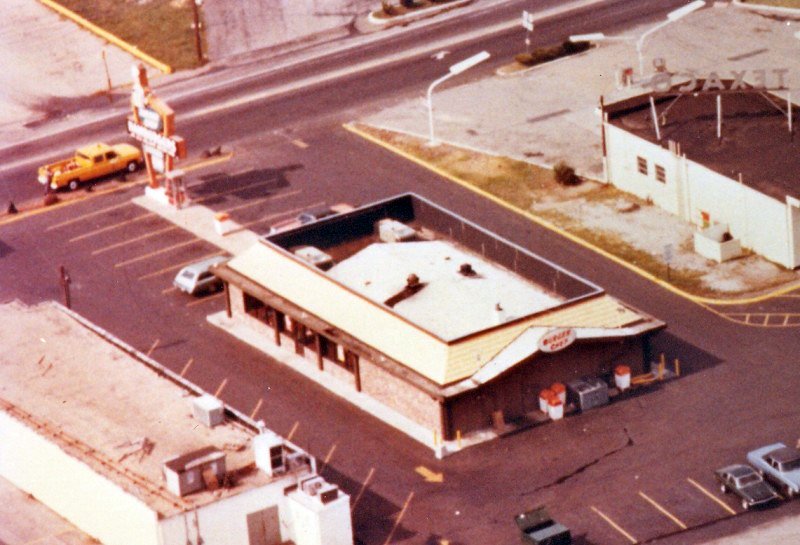 The Valley Station Road - Louisville,  Burger Chef from the air about 1975, just after it's major remodel.  The new remodeled buildings added

at least 25 more feet of dinning space.  See Building Plans page for blue print picture... bc of Louisville remodeled about 7 of the Louisville

stores from the original "Kite" designs to the "New" yellow roof and brown timber designs.  Still visible is the old pitched roof of the original store. 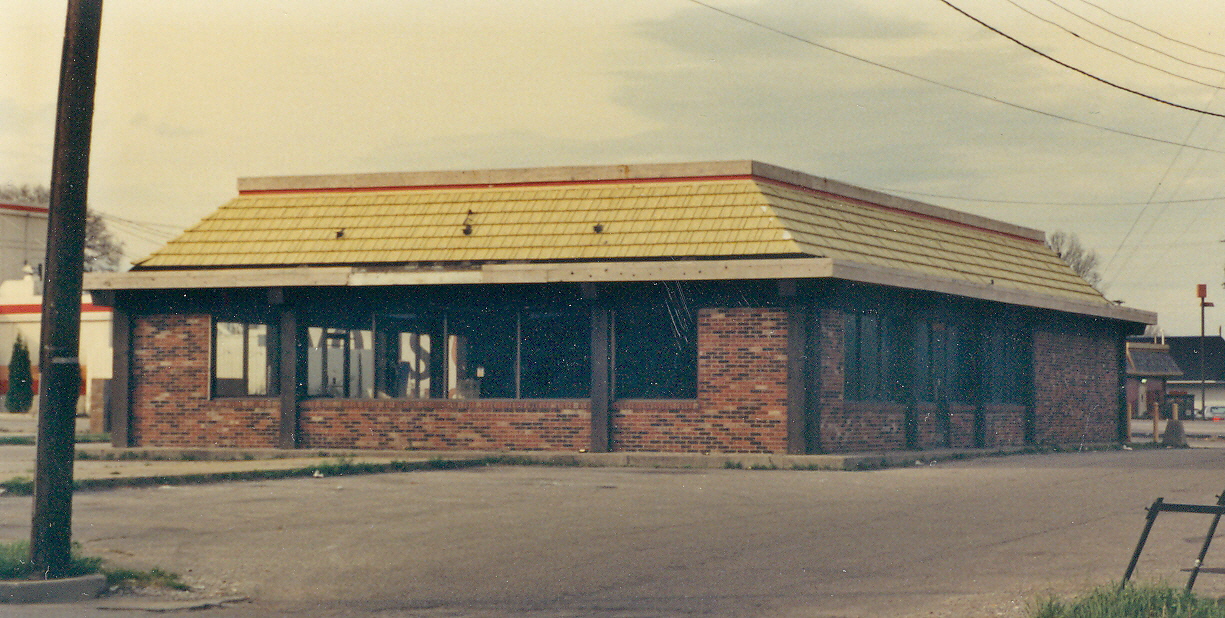 Above are two pictures I took of Valley Station, KY bc, about 1988 or so.  A consignment store had just moved out, same colors before Fantastic Sam's moved in.

The top most wood and the middle vertical wood has been painted a lighter color after bc closed in Fall 1982.

I am always willing to post other people's pictures, just Email me with them and any details you have.

Coming soon are some more pictures, THANKS for visiting!

and under 16 different franchise names.