This was the last remaining Burger Chef.  It was changed to Pleasers, then closed.

Cookeville is east of Nashville on I-40. below, 2008 Former Cookeville Burger Chef pictured by Kevin O'Mara of http://klophoto.com  THANKS for the update !!!!!

Well...below is the building of the last Burger Chef on fire (as India Palace) in Summer 2008. 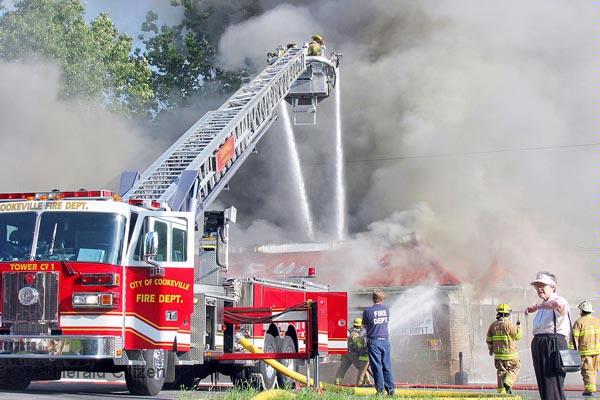 The building was destroyed, it has not been bc since about 1996, it was several different restaurants since bc closed.

Drive-thru menu sign, showing it's age.  Owners couldn't get advertising or support,  Hardees' really didn't want any Burger Chef's open.  BC Franchise contracts were not renewed on expiration, leaving restaurant owners without a restaurant name.  Some of them joined the "Pleaser's" group, but didn't have strong advertising support, some remained independant and came up with some pretty catchie names, like "The Chef", "Schroder's" and "Jim's Burger Haven", just to name a few. This is the back of Cookeville Burger Chef, it was probally originally built about 1966, you can really tell where the old met the new.  Unknown when it was remodeled, or to what extent.  Most bc's in the late 70's had the yellow roofs with red letter signs. This was the last known sign. It was still standing until 1996.